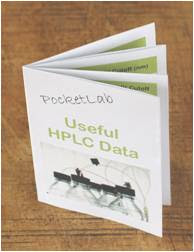 This useful little booklet is made using a single sheet of paper. It contains information on the following:

The links below open as pdf documents (available for A4 and Letter sized paper) which contains clear instructions on how to fold your PocketLab including advice on suggested printer settings.

Lab Tech Guy on white powder on the balance

What is HPLC column efficiency?

PEAK SOLUTIONS
A resource for chromatographers 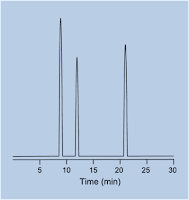 Column efficiency, also known as plate count, is a measure of the dispersion of a peak. Narrow peaks take up less space in the chromatogram and thus allow more peaks to be separated. They are also easier to integrate since they give better resolution and less overlapping. Efficiency is usually explained using the concept of theoretical plates. This model supposes that the column contains a large number of separate layers. Separate equilibrations of the sample between the stationary and mobile phase occur in these plates. The analyte moves down the column by transfer of equilibrated mobile phase from one plate to the next. It is important to remember that the plates do not actually exist, they are a means to help understand the process at work in the column. They also give a measure of column efficiency by stating the number of theoretical plates in a column, N. A high value for efficiency indicates that more peaks can be separated. The number of plates will increase with the length of the column. The calculation for efficiency is related to the peak width and is as follows:

where t is the retention time of the peak of interest and W is the peak width at the base (as shown in Figure 1).
Figure 1 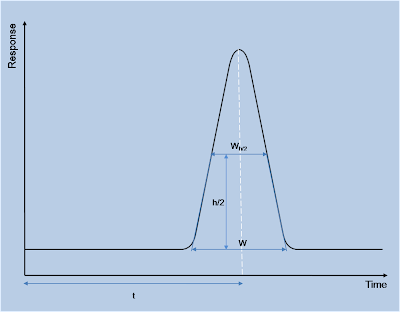 where Wh/2 is the peak width as half height. It can be seen that N is related to the analyte peak and thus the column behaves as if there are different numbers of plates for each solute in a mixture. When the peak width increases resulting in broad peaks, it is due to band broadening. There are a number of different reasons for band broadening:

HPLC columns which contain packing of smaller particle sizes give better efficiency because the diffusion paths are shorter allowing solutes to transfer in and out of the particle more quickly and thus reducing band broadening.

A typical acceptance criterion for efficiency would be > 2000. Although the value for new columns would usually be very much higher than this (values in the tens of thousands) the system suitability acceptance should be based on a value which indicates that the efficiency is no longer sufficient for the separation. These calculations only apply to isocratic separations. For gradient methods the peak width remains fairly constant throughout the run due to the changing mobile phase composition and therefore the value for N would appear to increase with retention time. A more useful measure of the column efficiency would be the peak width at half height for the analyte. Monitoring this value could provide a measure of when the column efficiency is no longer sufficient for the separation. Resolution depends indirectly on efficiency and therefore if resolution is a parameter in the system suitability test then a measure of efficiency is already included.

The calculation for efficiency using the peak width at half height is common to the USP, EP and JP although the terminology and notations used are not identical. However, due to a slight difference in rounding, the constant in the equation is 5.54 in the USP and EP but is 5.55 in the JP.

This blog post is an excerpt from 'An Introduction to HPLC for Pharmaceutical Analysis' by Oona McPolin, available to purchase through the MTS website.